As a self-taught artist of both photograph and paint mediums, Greg Wilson presents a life-like style and precision to his work. Such an understanding could only come from spending countless hours observing and documenting rarely glimpsed animals in their natural habitats.

Greg Wilson is a nationally-acclaimed wildlife painter and recognized photographer. Born and raised in Telluride, Colorado when it was still a little-known mining town, Wilson spent the majority of his early life outdoors. Armed with a notebook and his insatiable curiosity and appreciation for the natural world, he would often disappear for days to observe and document rarely glimpsed animals like fox and bobcat in their natural habitats.

Countless hours of observation accrued as a boy, a young man and, now, a seasoned artist, giving rise to the unique, life-like style and precision for which Wilson is most known. His self-taught technique evokes a sense of quiet recognition and appreciation—a stillness—one experiences when encountering an animal in its habitat. The spirit of the wild, itself. 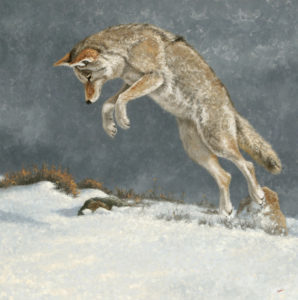 It is this very spirit which spurs Wilson to travel hundreds of miles to do what he did as a boy. Venturing into the mountains with his paints and camera in tow, he seeks breathtaking scenes: a fox bounding through the snow in pursuit of its prey, yellow-headed blackbirds singing atop swaying cattails, mountain goats traversing a rocky face. And Wilson’s patience and keen knowledge of animal behaviors and movements nearly guarantees he won’t go home empty-handed.

As a professional photographer, Wilson has amassed a collection of more than 100,000 photographs, many of which serve as references for his paintings and have been featured on the covers of various wildlife publications and in wildlife calendars.

Today, Wilson’s paintings can be found in collections across the United States and Canada, and have earned him numerous awards and recognition in prestigious shows such as the Arts for the Parks national competition and Western Heritage Artists Art Show. His work has been chosen for inclusion in the Bennington Center for the Arts’ Artists for the New Century and Art of the Animal Kingdom exhibitions, and published in The Red Fox in Art (Skagit River Press). 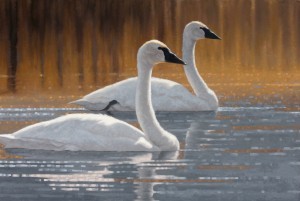