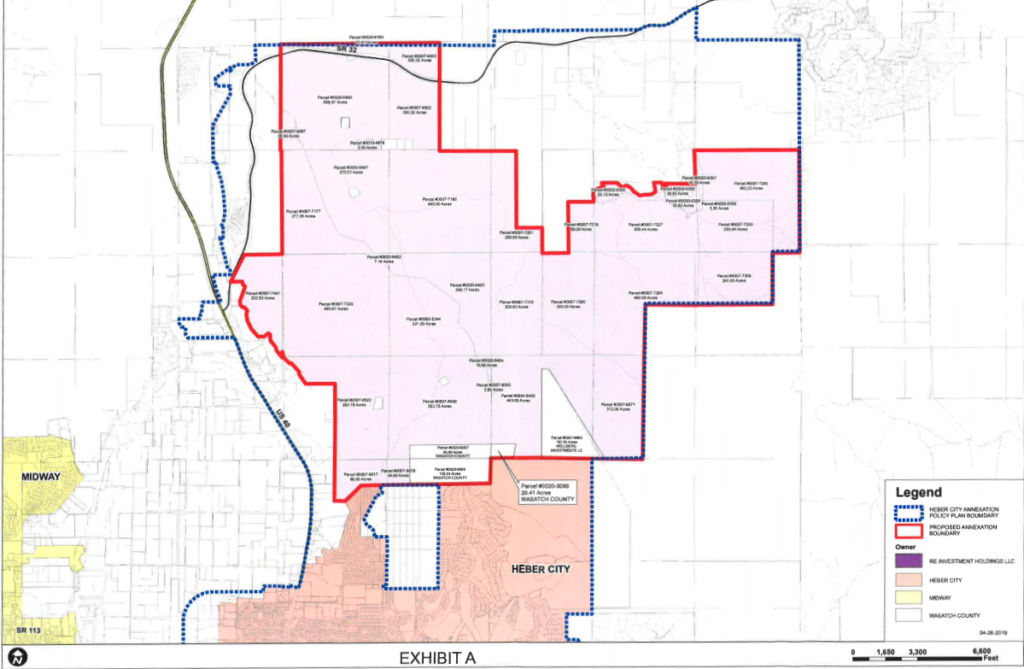 Heber City Council approved the annexation of the Sorenson Property, meaning the incoming 5,700-unit development built over the course of 40 years will officially be a part of the city.

The 5,700-unit development is located on 8,000 acres to the north of current Heber City development. The annexation agreement has placed the development on 3,000 acres of the land leaving the remaining 5,000 acres as natural open space.

The property was originally granted entitlements to build by a previous Wasatch County Council, without the annexation agreement the development would have had the same units in unincorporated parts of the county.

The developers began the process to petition annexation into the city over a year ago. The result was hundreds of hours by the developers, city staff and the council to create a 50-page master development agreement outlining how the development will be built as a part of Heber City.

Ahead of the meeting Mayor Kellen Potter shared that the developer has put around $20 million into a system in the area meaning they won’t be using the city’s water and sewer systems. They’ll also pay city taxes along with a provision in the MDA that if any services cost more than they do for the rest of the city that a special assessment will be required.

Council spent a few additional hours ahead of voting on the agreement making some final tweaks. Those amendments included language that required affordable housing to be built, not allowing a fee in lieu to be paid instead. Council also finalized items such as amenities in parks, private street widths and dethatched garages. Mayor Potter shared her thoughts on the thoroughness of the project ahead of the vote.

“I would just like to add that I am positive there’s not a development agreement in this county that’s been discussed and worked on for so many hours, and is so thorough,” Potter said. “I’m going to put some stuff out there for the public, because there are a lot of things that people think weren’t thought of, I think everything was thought of. So, well done to everyone who’s worked on this.”

Council member Mike Johnston made the motion to accept the master development agreement and annex the 8,000-acre property into Heber City.

“I want to say that we appreciate as a city council, the work that the staff has done,” Johnston continued. “Hundreds of hours I think have been put in by staff on this important development and future of our city. I appreciate the work that Mike Bradshaw has done and the property owner, and developer. So, I would like to make a motion that we accept the development agreement for the upper Jordanelle master planned community as we have amended it tonight.”

The motion was passed unanimously by the city council.

Karyn grew up in Utah and finally found her way to the HV in 2016 with her husband and 7 children, ages 2-27. Karyn has a BS in Special Education and a JD in law, but she mostly makes food and drives kids around.
All Posts
PrevPrev PostWasatch County Moves To Low Risk Yellow Phase
Next PostWasatch County FairNext